If you would like to attend the masterclass, please e-mail Dr Cordelia Warr, Art History and Visual Studies (cordelia.warr@manchester.ac.uk).

The class probes the circulation of people, ideas and objects in the early modern Spanish world. While focusing on circuits of exchange, discussion will move beyond “origins” and a model-copy dichotomy in order to investigate refractive networks that emphasize materiality, context, and performance as sources for new meanings within the Spanish viceroyalties. Cases in which images gain currency through repetition, adaptation, and travel are especially relevant. We also explore the transformative potential of exotic materials, particularly with regards to devotional objects. How do early modern encounters impact the sacred in its material forms?

González, Cristina Cruz., “The Balvanera Escudo,” Conversations: An Online Journal of the Center for the Study of Material and Visual Cultures (2014): https://mavcor.yale.edu/conversations/object-narratives/balvanera-escudo

González, Cristina Cruz., “Our Lady of El Pueblito: A Marian Devotion on the Northern Frontier,” Catholic Southwest: A Journal of History and Culture 23 (2012), 3-21.

Title: Conventual Bodies and the Body of Christ: The Power of Christocentric Piety in the Early Modern Spanish Convent

Art history has approached female monastic culture in New Spain through the lens of crowned-nun portraiture, a late colonial genre that reaffirmed a nun’s position as a mystical Bride of Christ. This has led to scholarly neglect of female imitatio Christi and the ecclesiastical pretence exhibited by several early modern holy women in Spain and Spanish America. Using examples from Spain, Mexico, and Guatemala, this talk explores the various pictorial strategies for capturing and performing an alter Christus status in transatlantic female communities. I discuss the images from the standpoint of their theological and political relevance while considering their optical demands and how they enlighten our understanding of a mimesis-imitatio correlation. 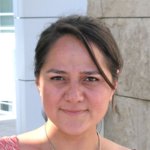 Cristina González is finishing her first monograph, “Landscapes of Conversion: Franciscan Politics and Sacred Objects in New Spain,” which is focused on Franciscan image theory in colonial Mexico. The book considers the relationship between medieval piety and colonial devotions, the circulation and propagation of sacred objects in the Americas, and the effect of mendicant patronage on religious ritual. She has begun work on a second book project, “Women on the Cross: Imitatio Christi and Female Piety in Early Modern Spain and Spanish America.”